How to get a baby girl? 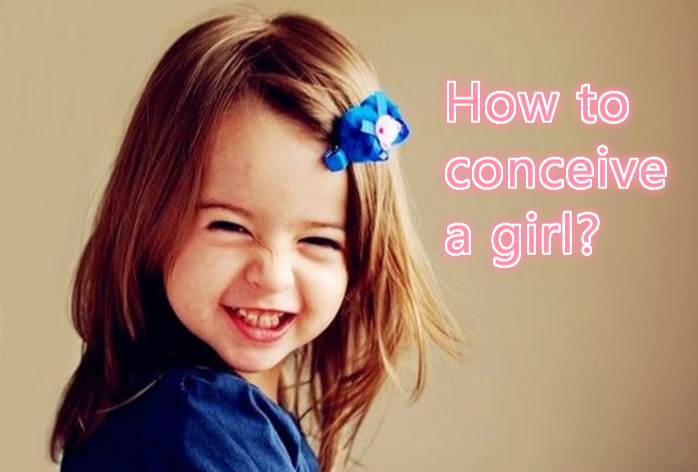 Girls are lovely, tender and considerate for their parents, thus loved ardently by modern young parents. Many parents want to give birth to a baby girl so that they can dress her up as a cute little princess. For some families, they already have baby boys, so when they plan to get another baby, they long for a baby girl to have a balance. Then how to conceive a baby girl? Here are some tips to help raise the chance.

Basic Knowledge about Baby Selection:
The baby’s gender is determined by the father. The women carry the X-chromosome in eggs. Men, on the other hand, have X (girl-producing) and Y (boy-producing), so, each of the sperm carries one of the two chromosomes. When the X- producing sperm penetrate the egg, the girl will be conceived. And if ‘XY’ is formed, the baby will be a boy.

Mother-to-be: Acidic Food; Father-to-be: Alkalescent Food
For a mother-to-be, if you want to conceive a girl, you should avoid eating too much alkaline food rather than taking in appropriate acidic food. Of course, you should not eat too much acidic food, so as not to affect your health. Here, the acidic food doesn’t mean the food with sour taste or smell but the food which can lead to the acid-base imbalance of the human body environment.In daily life, the acidic food includes: all kinds of meat, fish and dairy products excluding fresh milk (such as cream, ice cream and cheese), rice and wheat flour products, can, corn, egg white, sour fruits (tomato, orange, strawberry, grape, apple, pineapple, etc.), chocolate, beverage, and vinegar. Eating the above food will make your body acid.For a father-to-be, you can take more alkaline food, including vegetables, fruits, milk, flour products, tea, kelp, seaweed, iodine, calcium, Vitamin D, etc.

Eating More Fruits and Vegetables
Scientists have found that if your diet a few weeks before the pregnancy is rich in calcium and magnesium (such as green vegetables), you will be more likely to conceive a baby girl. In a group of women participants whose diet is carefully matched by the researchers, 80% have given birth to a baby girl. In contrast, you will be more likely to give birth to a baby boy if you eat more food rich in sodium and potassium (such as banana and potato) a few weeks before the pregnancy. However, it remains to be confirmed by further studies.

Eating More Desserts
American researchers have found that, food can swing the female reproductive system through the hormonal action to make a certain gender embryo have stronger “survivability”. Therefore, the content of sugar and fat in a mother-to-be’s diet have certain impact on the fetus gender. If you like to eat desserts, you will be more likely to conceive a girl.

Research shows that the more sperms in intercourse, the easier to have a baby boy; the less sperms in intercourse, the easier to conceive a baby girl. According to this theory, if you want to give birth to a baby boy, you should abstain from sex several days before ovulation, so that your husband will produce the largest amount of sperms and the chance of Y sperms fertilizing the egg will be improved. If you want to have a baby girl, however, you don’t need to abstain from sex but keep the normal frequency (e.g. once every three days) and you’d better have intercourse two days before the ovulation.

Note: To get to know your ovulation date, use Ovulation Date Calculator if your menstrual period is regular. Or, you can buy ovulation detection kits to test.

In terms of sexual positions, the traditional Missionary position is suggested and the deep penetration should be avoided. At the same time, you should avoid having an orgasm to reduce the chance of having a baby boy. You should abstain from sex one week after the intercourse as it is the gestation period.

The Right Date to Conceive a Girl

There is a 700-year-old Chinese baby gender chart which could help you find out the suitable time to conceive a daughter. You can use Baby gender selection tool to check out the dates very easily. Just select your birthday in Gregorian calendar, the year you plan to get pregnant and baby girl, the calendar will show you the suggested conceiving time for girl in Gregorian calendar. This conception chart is proved to have a high accuracy but still not works for everyone.

The Older the Parents, the Higher Chance for Girl

It is an indisputable fact that the older the parents, the easier to conceive a baby girl. The age factor will affect the physical quality of both man and woman. For a father-to-be, your sperm count will decrease with the increase of age; for a mother-to-be, your physiological hormone will change with the age and the alkaline secretions in your uterus will decrease with the increase of age, thus the chance of having a baby girl is greatly increased.

According to the latest research of Danish psychologists, females are more likely to conceive a baby girl under the great mental stress. For a mother-to-be, the great pressure will create a strong acid environment which is adverse to Y-bearing sperms and increases the chance of having a baby girl. For a father-to-be under the pressure for a long period of time, the sperm count will decrease. Although it is easier to conceive a baby girl under the great pressure, you are not suggested to do so because the health of you and your baby is much more important than the baby’s gender and you should let nature take its course.

According to the statistical report, a man will be more likely to give birth to a baby girl if he is a driver, flight attendant, pilot, anesthesiologist or an office worker sitting in a computer radiation environment for a long time. This is because the great change of temperature, pressure and radiation or the inhaling of too much toxic anesthetic gas will kill the Y-bearing sperms first which are weaker than the X-bearing sperms, thus the chance of having a baby girl is increased.

If the parents are both smokers who keep smoking during the pregnancy, the probability of conceiving a baby boy will be almost halved. Smoker parents may “kill” the male fetus in the womb. Even if only the father smokes, the mother as an involuntary smoker is more likely to give birth to a girl. It is supposed that smoking can bring certain change to the mother’s body, such as estrogen hyposecretion and uterine lesion; the Y chromosomes in a man’s sperms which play a decisive role in giving birth to a boy are very sensitive to this kind of change and will be hurt by the change, thus the chance of conceiving a baby boy is reduced.

Pretty Parents are More Likely to Have a Girl

This interesting research is based on a statistics which shows that the chance of pretty parents giving birth to a girl in the first pregnancy is 26% higher than giving birth to a boy. However, whether the theory is scientific is to be proved. So, just look for a pretty lover if you want to give birth to a baby girl!
Credits:  www.yourchineseastrology.com/ways-to-conceive-baby-girl.htm

This site uses Akismet to reduce spam. Learn how your comment data is processed.